"Him" would be my husband - and it's true, he's having a very difficult time of it right now.  He's railing against fate and limitations that make him feel less like himself.  Somehow, I think he didn't believe he would ever age, would never be mortal, would have physical failings beyond his control.  He pushes back, risking everything.  That makes me so angry - and scares the hell out of me all at the same time.

5 months ago, he was in a car accident.  He was driving through a neighborhood at a slow speed, knowing there were children in the neighborhood.  Next thing he knows, there's a sheriff's deputy asking him if he's alright.  He doesn't remember anything, but the front end of his truck is wrapped around a tree in someone's front yard.  We don't know why this happened, but we suspect he may have fallen asleep at the wheel.  The deputy seemed to think so.  And husband has had a hard time getting rest lately.  He woke exhausted after a night's sleep.  Apnea seems a reasonable issue, so we pursue seeing doctors and getting a sleep study.  He's supposed to get the results of that study next week.

Things seemed to go back to normal.  We bought a new-to-us truck that was in great shape and had low mileage for him to drive and we were set.   Until last weekend.

He got up early to go to work.  He put the animals out so they wouldn't bother me, made some bacon and left the house around 6:30am.

I got up just before 8 and was just sitting down with my tea about 10 after when the phone rang.  Caller ID said it was the hospital.  My mind raced.  Mom?  Dad?  Which one of them had gone to the hospital?  But when I picked up the phone, it wasn't them - it was my husband.  A nurse told me that he was in the Emergency Room, that there'd been an accident.  He'd just come around and they were trying to keep him lying on the table - I heard the nurse tell him to please lay back and don't move.

I get there and my husband is sitting up in the trauma area.  He's got IV's in his arms.  He's in a hospital gown.  He looks dazed and has the most impressive shiner I've ever seen blooming around his right eye.

He doesn't remember anything.

Like the previous accident, he was driving along (about to get on the interstate) and then he was lying on a gurney in the hospital and he has no idea what happened between those two events.  The police left just before I got there and they told him that he'd been in an accident.  That he hit another car.  That an eyewitness said he'd been having a seizure at the time of the accident.  A seizure?  This is new information to us.  He's never had one before (that we know of).  Could that be what happened in the first accident too?

We are at the hospital all day.  He gets intravenous liquids.  They give him a loading dose of an anti-seizure medicine and a prescription for more to be taken twice a day.  Finally, they say we can go.  I get his bag of clothes so he can get dressed and there's no shirt.  It had to be cut off of him because they were concerned about a neck injury.  The nurse goes and finds him a shirt.  It's a scrub shirt with some event logo on the back.  He is now in style with a number of homeless men who have passed through the doors of the ER, whose shirts were ruined in one way or another. 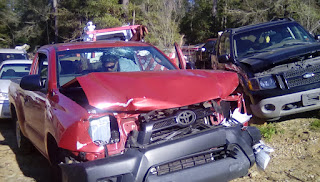 His stuff is still in the truck, including his glasses.  I call the tow yard and arrange to meet someone there so we can get his stuff back.  After a short wait, someone shows up and leads us through a gate to a space behind the building.  There, we find his truck and the car he hit.  From the secondhand description, I thought he'd rear-ended someone, but this car was hit in the side.  Puzzling.  Not sure how he managed that. 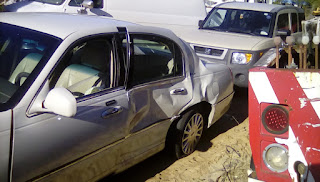 The inside of the truck seems somehow compressed.  The airbag went off.  The rear-view mirror is sitting on the floor.  The seatbelt is locked tight and cannot be pulled out from its retracted position.  The passenger side door won't open at all.  I get the distinct feeling that my husband is an extremely lucky and/or blessed individual.  He should have been hurt far worse.  Had he actually made it to the interstate, he might even have been killed. 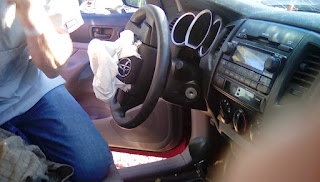 So now, life is changed.  He can't drive, obviously.  I have to take him or he rides the bus or his bike to get around.  He walks.  He is making the adjustment, but he's not happy about  having to do it.  Losing his ability to drive (at least for now) makes him understand his dad a little more.  His father had his license taken away and felt like less of a person because his mobility and freedom to do things on his own had been taken from him.  My husband CAN be mobile, but not in his own car so it's a little different.

But it's still an adjustment.  He's trying to make the best of things and putting the best face on it that he can - but it's still hard on him. 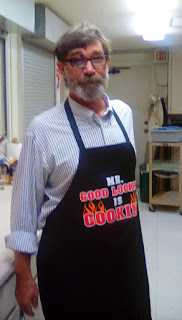 UPDATE (March 2016):  He is adjusting well.  He's surrendered his driver's license, saying that he just doesn't want to drive anymore.  He gets around on his bike and is probably the fittest he's ever been.  The medication that they gave him in the hospital seems to work really well and he has had no more creepy feelings or seizures while on it (they took him off briefly and the seizures returned, so he's back on and has had no more since).  He feels pretty good and is rather proud of his reduced carbon footprint.

UPDATE  (January 2017)  He was going to get his license back in May.  We bought a little Ford Ranger for him to drive when he did.  A week later, he had another seizure at work.  Back to the hospital and the doctors - where he admitted that the medicine made him feel sleepy and that he wasn't taking it "as directed", but rather skipping doses here and there.  He was told in no uncertain terms that taking the medication as prescribed was absolutely necessary if he didn't want to have seizures.  He has since been doing as he was told and has had no more problems.  He'll be getting his driver's license again in March and HE gets the honor of teaching our granddaughter to drive.  He doesn't want to mess that up.
Posted by Sayre at 3/25/2016 10:06:00 AM

Thankful to know he's still with you after such traumatic episodes. Bless you all.