First Monday - Change is in the Air

I'm not going to lie...  2011 was not a great year for me (or for anyone really).  Several people I know died.  More than a few lost their jobs.  The economy was down, which has never really affected me before but it did this year as we took a pay cut (6% in my house) from our regular jobs and my husband's main freelance employer pulled out of town.  On the upside there, the university gave 3% across the board raises to counteract what our Governor did to us, but it took 3 months to kick in and that was just enough to nearly put us under. My husband has found other outfits to hire him for his freelance stuff, but has had to prove himself all over again which gets old when you're actually one of the best in your field.

Obviously, financial stability isn't what I accomplished in 2011.  I have some hopes for 2012, but I'm getting ahead of myself.

If you know me at all, you know that one of my favorite places to hang out is the bookstore.  I don't have to buy anything but I love to peruse, to smell the books and page through the ones that look interesting.  Books are expensive and when I'm in really dire straits I spend more time hanging around the bargain tables and clearance racks.  I was doing this one day last summer when my eyes landed on a book by Debbie Macomber.  Debbie writes romance novels.  I was introduced to her one year when we were evacuating our home due to a hurricane.  I'd stopped at a drugstore looking for a book to read while we rode the storm out at my parents' house and found a trilogy that tided me over.  I'm not a romance reader as a rule, but her style of writing caught my attention immediately and her deft hand at drawing characters within a page left my jaw hanging in awe.  So when I saw a book by Debbie Macomber on the bargain table, I picked it up.

I didn't know what it was, but the inside jacket flap asked a question I've been asking myself for quite some time:  What if you, personally, could make the world a better place...  by tomorrow?  I've been wondering that for a while, actually.  I think being a mother makes you want to better the place your child will grow up in and inherit.   I also feel like being a citizen of the world I'd wish for stable economies, copious resources and peace.  But I'm just me.  I don't have millions of dollars to throw at the problems - but even the people who do don't seem to make a dent in any of the problems out there but tend to hoard what they have against the day everything falls apart.  So what CAN I do that will make a difference?  As it turns out, it really is simple.  Take every opportunity to do something good.  It can take any form - from holding a door for someone with arms full to making up the difference between what someone has and what someone needs, whether that be money, time or company.  Sometimes just listening when someone needs to vent or telling a joke when someone needs to laugh.  Take every opportunity that presents itself and run with it!
I've made a good start with this but as always, I know I can do better.  I'm going to continue along these lines in 2012. 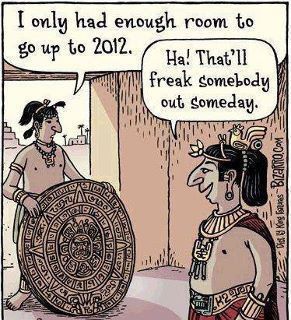 As for 2012, who knows what the future brings?  Lots of people seem to think the world will end.  Of course people have been thinking that forever.  For some people it will.  Maybe I'll be one of them.  Maybe not.  But whether I see 2013 or not, I intend to live each day to the best of my ability, as fully as possible.  2011 was a scary year for a number of my friends when cancer became a part of their lives.  As I witnessed their struggles and fortitude, I learned a lot about life in general - and one of those things is that all we have is this day.  Anything more is a gift, not to be squandered on anger or mean-spiritedness.  In a way, it all ties in to what I wrote above - so I take the lessons of last year and apply them to this new one.

I too hope 2012 will be better for all of us. Happy New Year to you and tour family.

I love your post. Staying positive and believing in what's possible is the key to a happy life. At least I think so.
My post is up.

I love the idea of doing something good every day. I will try to succeed.

(the other thing I'm going for is reading my bible every day and so far I've already failed this year....totally forgot yesterday).

(I will admit I don't like Debbie Macomber. I read one of her books and it just pissed me off - the characters were so naive and ridiculous. I never tried anything by her again....maybe I'll have to try a different book)

I've been trying to do at least one random act of kindness each day for a while now. Sometimes it's holding a door, but usually it involves driving. Letting a car out in traffic usually. Down here, it's a rare act so when i do it, I know it's probably making someone smile inside.